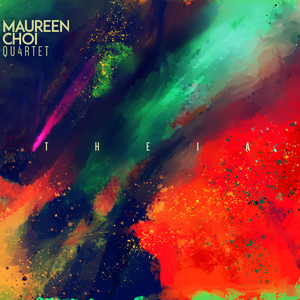 “Maureen Choi is one of those rare talents that can navigate in a number of musical styles from classical to jazz and everything in between” – James Nadal. All About Jazz.

Now residing in Spain, this Korean-American violinist is sparkling a revolution in the improvised music scene in Spain. Her ...

band “Maureen Choi Quartet” is creating a sound that they describe as, “Spanish Chamber Jazz”.

After winning several international violin competitions starting at age 5, Maureen has performed as a soloist across Australia, Asia, Europe and North America. A graduate from Michigan State University and Berklee College of Music, she has performed with artists like Rodney Whitaker, Johnny O’Neal, Larry Harlow, Josh Groban, Kanye West, Tran-Siberian Orchestra, or Javier Colina and recorded for many artists and movie soundtracks. She taught improvisation, Latin rhythms and violin technique at Berklee College of Music and presently she teaches at Centro Superior Música Creativa in Madrid.

She recorded her first album as a leader “Maureen Choi Quartet” with jazz greats from the Detroit scene and after moving to Spain and forming her own quartet, she recorded “Ida y Vuelta” featuring her original compositions and arrangements.

Her band, the Maureen Choi Quartet, won 1st prize in the International Jazz Competition in Talavera and since then, played more than 500 concerts in clubs and festivals all over Spain and the United States, making appearances on Radio 3 RNE and La Hora Cultural TVE (Spanish National Radio and TV).  Maureen Choi Quartet is continuously selling out tickets in places like Café Central (Voted one of the “World’s Top 100 Jazz Clubs in the World” by Downbeat Magazine) and has performed in the Madrid Jazz Festival, Jazz Festival in Guggenheim, Jazz Festival Yecla, Jazz Festival Teruel, Atlantic Sons Festival, South by Southwest, Festival de Jazz San Javier, CLAZZ and many more.

Choi is currently on tour with her new album “THEIA”, and is scheduled to appear in festivals in Beijing, Shanghai, Hong Kong, Taichung, Seoul, Jarasum, Tokyo, and Guangzhou later this year.

A New Leaf: Jazz Violinist Reinvents Herself and Sound with Spanish Inspired Album

A lot has changed for violinist Maureen Choi since the release of her 2015 Ida y Vuelta. It’s been six years since she moved to Madrid, and between teaching at Centro Superior Música Creativa and performing with her quartet, Choi has been absolutely steeped in Spanish culture. “I’ve always been so intrigued by Spain,” she explains. “Spain has contributed so much to culture, and living here I’m so in touch with it all—the richness of its history, the richness of its music.”

Now, Choi is ready to share all that she’s learned in Spain with her effervescent new album Theia (BarCo Records release: March 31, 2019). While Ida y Vuelta explored the rhythms and styles of the Spanish-speaking Caribbean, Choi’s new album turns toward her new, old-world home and revels in the sprawling and sundry roots of Spanish musical traditions.

Nowhere on the album can you hear this revelry more than in the album’s fifth track, “Dear Paco (Cepa Andaluza).” An homage to one of the greatest musicians in recent Spanish history, Paco de Lucia, “Dear Paco” is structured around a Flamenco rhythm called bulerias. The complex twelve-beat pattern  is uniquely difficult to master. “It was a huge challenge to figure out this rhythm,” Choi confides. “I didn’t have another violinist to look to—nobody has done this sort of thing with the violin before. So I had to figure it out myself.”

This hints at part of what makes Theia so special. Throughout the album Choi uses her violin in a distinctly untraditional way. Where “Dear Paco” evokes Flamenco guitar, the track “Bok Choi (Pajarillo)” draws inspiration from the Venezuelan joropo, usually played on the cuatro and Venezuelan harp. “I go straight to the roots,” Choi  tells me, “to the folklore of what inspires me.”

In this way, Choi’s playing style on this album is a sonic reflection of who she is today: a Korean-American violinist with a deep love for the sounds and rhythms of Spain. This pairs well with how Choi herself views the album. “Theia is like an open diary for me,” she says. “A lot has happened between Ida y Vuelta and Theia, and these songs tell the stories of all the experiences that I’ve had in Spain.”

It begins fittingly with “Phoenix Borealis”, a song of new beginnings and rebirth. Reinventing yourself is hardly ever an easy task, and “Phoenix Borealis” captures this perfectly. Beginning with a gentle and hopeful melody, the song quickly begins to spiral into all the chaos, turmoil, and fire that comes with change, featuring probably one of the most wild bass solos you’ll ever hear. In the end, the same hopeful melody reemerges, if only dazed slightly.

The following track, “Dance of the Fallen”, is a reflection on the life of Choi’s mother. Born in Korea, she was a soprano who worked as a vocal teacher before coming to the States. Like many immigrants, her life was a challenging one. “Her life was a dance between tragedy and doing the best for her daughters,” reflects Choi. “She was always knocked down, but she always got back up again.”

Very much like the pages of a diary, the songs of Theia are varied in tone, mood, and subject matter. “September, the First” is a delicate meditation on loss and human fragility. Others are rollicksome, even a little humorous.“Canto Salamanchino” gets its name from the 5⁄8 rhythm particular to the  musical tradition of Salamanca, as well as a story of Choi’s Salamanquino pianist Daniel García Diego’s time in China.

When you listen to Theia , you’re hearing who Maureen Choi is and everywhere she’s been on her remarkable journey. There is the classical violin she was immersed in from an early age, and the jazz sounds she studied at Berklee. You can feel the Latin rhythms Choi first fell in love with on the dance floor, then explored more deeply on Ida y Vuelta. The Spanish guitar her father played when she was a child, along with all her favourite Spanish composers in the classical violin repertoire, laid the groundwork for her deep dive into the folkloric traditions of her new home in Spain.

Those life experiences nurtured not only Choi’s finely honed skills, on full display on Theia, but also a mature, confident self-expression that can only come from creating with her whole heart. “The elements that make up this album are all dimensions of my life, past and present.” Choi affirms. “I’m taking everything I love and everything I am and pouring it into my music.”